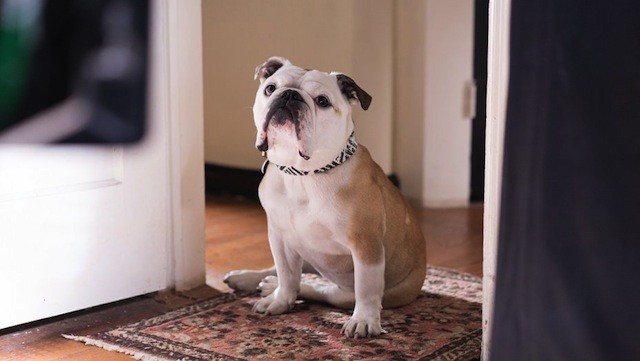 1. What is the purpose of art not in the face of political tyranny or religious terror, but of the reasonable normalcy and cheerful banality of daily life? Does it, in the era of anti-Enlightenment, still have the legitimacy to offer spiritual consolation to the many individuals who simply seek an internal harmony? Jim Jarmusch’s sublime, supremely edifying new movie, Paterson, responds with a resounding ‘Yes’. It is a film that, in its own understated way, carries on what religion and religious art have sought to do through the centuries: to help a man come to terms with the bleakness of his condition. It is with this picture that Jarmusch’s cinema transforms itself from being deadpan to being stoic, one that embodies an attitude of heroic equanimity towards the crushing weight that is everyday existence.

2. The protagonist, Paterson (Adam Driver), is a bus driver in the city of Paterson, New Jersey, who writes free verse in his free time. He has a healthy, loving relationship with his companion Laura (Golshifteh Farahani) who is also trying to figure out in a scattershot fashion the things that make her tick. Over the course of seven days – seven movements, more like – we witness Paterson’s routine, the small deviations from it, his attempts at composing poems, vignettes from the life of the people (and pets) around him and chance encounters with strangers. These are all people slowly being worn out by the grind, but none of them come across as neurotic or pathetic – defining traits, we are told, of people chasing the American Dream. Everyone carries their own cross, may be with a little whining, but always with dignity. Jarmusch the outsider’s address is a respectful and comes from a place of love – uncommon in contemporary American cinema, and poised to be more so in the next four years.

3. The routine is not simply an abrasive force in Jarmusch’s work. It is not merely a suffocating stronghold against which people in the film knock their heads. The routine is also a place of refuge, a framework within which to find one’s way, a regular structure against which to measure up the beauty of the irregular. The sun rises and sets every day, but no one ever lives the same day twice. There is historical value to the routine, one that helps to narrativize life, to establish ideas of continuity and rupture.  All the characters in Paterson respond to this regularity (and loss thereof) through art – poetry, music, performance – proposing self-expression as the primary means of making sense of the world. The French word répétition has a curious double signification. It refers to repetition, but also rehearsals in the theatrical sense – a reiteration of the same old, but also a preparation for something larger to come. Répétition is the operating principle of Paterson, a work overflowing with structural, aesthetic and conceptual repetitions and doublings – internal rhymes – that embody not just poetry but creative power in their very redundancy.

4. Unlike so many characters of independent cinema and some of Jarmusch’s own earlier ones, Paterson is not a cipher embodying a cool indifference to his situation. He is wracked with that self-doubt characteristic of authentic personalities. Anybody who has ever experienced the disappointment of reading a hard-thought idea expressed with easy elegance by someone else can identify with Paterson’s self-questioning surprise at hearing that hard-earned thought, that precious turn of phrase coming without effort from unexpected corners. Paterson will never know whether what he experiences is genuine inspiration or just deferred clarity, whether what he produces is of any value at all. But he must continue to write. It is in this recognition of the necessary existence of an internal motive force and an aesthetic need within man that Jarmusch’s film gains the spiritual vigour it possesses.

5. Few filmmakers working today capture the sense of immediate time and place as Jarmusch does. His signature tracking shots of the eponymous city (always the view from the car window), the prolonging daylight (the first day of spring, the last day of winter) are not just devices for authenticity, but elements that marry the rhythm of the city and the season to that of the movie. Consider how the rhythm of the work subtly changes as the seven days progress without threatening the harmony of the film. The emotional tone of an Monday evening at the bar is different from that of a Friday evening, as is the muted soundtrack. All the days end with a fade out, but these are used not to escape a dramatic situation but are meticulously introduced to leave you with specific afterimages of specific days, like lines in the protagonist’s poems. It is hard to think of a better tribute to William Carlos Williams, whose poetry is in the very DNA of this film.

6. Like in The Turin Horse, the religious implication of the seven days in Paterson cannot be overlooked. Jarmusch’s film traces the pseudo-secular industrial work week, which neatly separates work and entertainment into weekdays and weekends, only to softly disturb it (I hesitate to use the word ‘upset’ – everything about the film is so gentle). It understands that the creative impulse knows no time slots, and that there can be no Sunday painter who does not paint on the other days as well. Despite this obvious structuring device, Paterson is a very transparent work. It does not use repetitions and multiplicities as a ruse, but as the very basis of its argument. And despite this week-bound narrative, there is a lyrical fatalism that pervades the picture – explaining it would reveal important details – whose tragic-heroic dimension imparts a timelessness to the film. Paterson is at once a portrait of a modern-day blue collar worker and of a poet, a snapshot of the present and of the ever-present. It will endure.